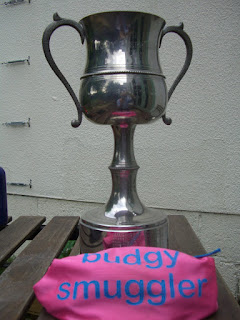 I thought I would show off the impressive trophy that I won in the Lido sprint. The largest trophy I have ever won by some way and yet relatively probably one of my least impressive swims. It was neither a particularly fast time nor did I beat a vast field of sprinters to secure the title. Still as in life the reward doesn't always match the achievement.

The opening of the Lido has meant most of my training now is in this wonderful outdoor 50m pool and I am enjoying the cold mornings and still relatively quiet attendance. I was amused to note that in the Lido the 'teabags' (people who just bob up and down the pool) can sometimes be seen wearing sunglasses while swimming. I use the term 'swimming' loosely as I don't believe you can really claim to be swimming if you are trying to keep your face and hair dry, wearing sunglasses and sedately breastroking up and down the pool. Instead what you are doing is really just a form of floating. Perhaps 'directed floating' would best describe this activity. I've never held breaststroke in high regard anyway, it's clearly not a real stroke if you can do it with sunglasses on instead of goggles.
My biggest achievement this month has been the 3kg of weight gain I have achieved. Finally I am seeing some results. I think I have achieved this by switching from a stuff your face at mealtimes approach to an 'eat constantly through the day' philosophy. The girls at work are getting sick of me whinging about how hard it is to put on weight as I munch a large block of chocolate each morning and a packet of biscuits each afternoon. They think it is grossly unfair and now I have started asking them for sponsorship they are asking why they should be paying me to torture them on a daily basis.
Off to Greece for a week. It is a holiday really but it should be a great training week, the sea temperature should be high teens, perfect for comfortable sea swimming and I hope considerably clearer and more attractive than Dover Harbour.
Well over 600km now for the year, 3kg of insulation added and now a trip to the Mediterranean, May has been a very positive month, only a little over 3 to go to the big swim.

Posted by Ollie and Vickie Wilkinson at 08:56 No comments:

I've been told off by one of the lifeguards at the LIDO - the visibility is now crystal clear. So clear you can see all the crap on the bottom of the pool.................just kidding. Sometimes I am surprised by the people that read my blog, actually I'm surprised that anyone reads my blog. I hope it provides some sort of entertainment, or amusement.
Posted by Ollie and Vickie Wilkinson at 05:01 1 comment: 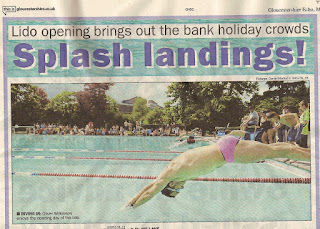 Well after several somewhat mundane weeks of training and work at least I have had a weekend of interesting swimming to report on. This was the first weekend of Dover swimming for the year and I was keen to experience the cold channel waters for the first time. As it happened my trip was delayed by a minor pet incident (terrier 1, viszla 0) that kept me in Cheltenham on the Saturday. However it gave me the perfect excuse to head down to the season opening of the Sandford lido, our outdoor 50m pool here. I warmed up with a gentle 4km session, less enjoyable than normal as the water had taken on the appearance of grey soup thanks to the accumulation of concrete dust from recent building work. Still as several people pointed out it was good open water training as you had to keep lifting your head up to sight the lane ropes, the wall, other swimmers etc. They also held the annual LIDO sprint, a one length dash open to all comers. I suppose I should put this in perspective, this is not a particularly serious race, the competitors are a mix of kids in board shorts, a few blokes pressed into action by their wives/girlfriends and the odd serious swimmer who happened to be there on the day. So it was no real surprise that my main competition was from Dan a young lad from the local swim club and Colin from the equivalent masters club. Dan and Colin raced each other in the first heat with Dan narrowly pipping Colin and I had the second heat mostly to myself (you can see two young lads with their feet still rooted to the poolside in the picture). In the final Dan had the misfortune of being placed in the large unlaned section of the pool which wouldn't have been an issue if it wasn't for the fact that the visibility (or lack of) meant he had to swim with his head up to avoid sprinting into the side wall. Colin and I had lane ropes to guide us when we breathed and I managed to just out touch him at the end. I now have the somewhat dubious honour of claiming the sprint in the slowest winning time on record (of course I am blaiming the concrete dust). I should also point out that my two main rivals Dan and Colin were respectively nearly 20years younger than me and nearly 20years older than me so if I hadn't won I wouldn't be bragging about coming second.

So Sunday morning was an early start as I drove down to Dover. 3 hours from Cheltenham and I have to admit I was very excited driving into Dover, I could see the harbour below me, the white cliffs ahead and in the distance out to sea, the French coast, I couldn't help but think "That doesn't look so far away!". I made way down to the beach and joined the throng of swimmers preparing for the morning's session. I was starting to feel a little anxious about how I was going to cope with the water temperature of only 10 degrees. We were given our caps and numbers and instructions; 35min if this was your first swim, 45min if you were there on the Saturday. Quietly I decided was going to do at least 45min - I hadn't driven all this way to get out after 30minutes......maybe. I did at least follow the suggestion to stick close to the shoreline at the start in case the cold got too much. So without much ceremony we were sent off, I didn't waste time tiptoeing into the water, I waded in and dived under, I came up hyperventilating and the most painful part wasn't my head, hands or feet it was the bits in the speedos that were making their discomfort known, they had obviously decided freezing water was not in their job description and were trying to retract back into my abdomen. Fortunately after only a minute the worst had passed and I felt suprisingly good. It was so cold that it almost felt like my skin was burning and as long as I kept moving I didn't mind it at all. I swam for just over 50 minutes and exited towards the back of the crowd. As I staggered up the stones one of the volunteers asked me for my number, "Number? What number?" I mumbled (my lips were quite numb by this stage), "The number we gave you on your cap", I looked at him as if he was mad, "well" I said slowly "What does it say on my cap?". He looked at me as if I were slightly challenged "This is supposed to check if you are coherent after the cold, now put some clothes on before you start shivering". I made my way to my bag still feeling OK, towelled off and started putting on the layers, and then it hit me; the shivering, the teeth chattering the uncontrollable shaking. I somehow managed to get my clothes on before it got too bad but I spent the better part of thirty minutes slowly warming up. This was by far the worst part and I hadn't expected it, I thought getting in or swimming would be the worst bit but by far it was the aftermath. The whole process repeated itself when we got back in for a second swim just after midday, the swim was fine and I managed another 50minutes but I made a quick dash to my clothes to change as quickly as possible before the cold overtook me. I drove back with the heating on full blast for 30minutes before I started to feel normal again. All in all it was a great experience, lots to think about, my reaction to the cold was in some ways better and in some ways worse than I had expected. At least the pink budgy smugglers got a double outing this weekend and I now have a very large trophy to show off............for beating a 15 and a 55 year old in a 50m soupy sprint.
Posted by Ollie and Vickie Wilkinson at 07:03 3 comments: