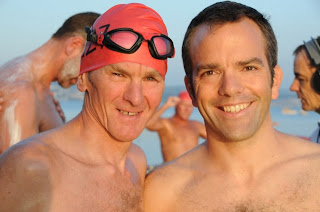 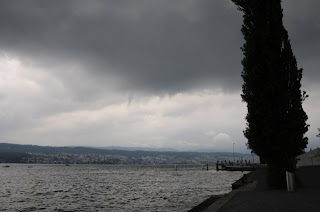 The forecast had threatened thunderstorms in the afternoon and I had hoped to be finished by then but the weather looked like it had other ideas. Almost bang on the 4hour mark the calm flat lake turned into a choppy, churning mess. White caps crested on waves coming straight down the lake and rather worryingly I could see warning beacons flashing orange on the edge of the lake. The beacons warned of adverse weather, 40 flashes a minute meant beware and be cautious, 120 flashes a minute meant serious danger (lightning etc) and get off the lake immediately. The organisers had warned us if that happened the race would be stopped and although we could get back in after a storm had passed there would be no official times or recognition of the swim. While swimming I could only glimpse the flashing lights and had no way of counting them so I just had to keep hoping they were staying at the slower rate. It was tough going, straight into a driving head wind and unpleasant chop. I knew in these conditions it would be a long hard to slog to the finish and the finish time would be a lot slower than predicted. I stopped worrying about my pace and just tried to maintain a steady rhythm. I could see I was still making slow but steady headway so I just
tried to focus on the next little landmark and not worry about how long it took to get there. We had nearly 2hours of this choppy, windy mess before the storm finally subsided and almost as quickly as it had arrived it was gone. The sky cleared, the water flattened and away in the distance Zurich and the finish line were finally in view. I finally succumbed to the nausea at this point and vomited all of the energy drink I had consumed in the last 6 hours, at least by then the end was in sight. The finish point always seems to take the longest time to reach, mostly I guess because once you can see it you just want to be there! As I often do at this stage of a swim I try not to look up too often and instead count strokes and tick off distances in my head; 100 strokes is about 150m or 3 lengths of the swimming pool, I tell myself not to look up for 500m just keep the head down and tick off the pool laps. Finally I could see the balloons over the official finish line, there were people waving and cheering at the end and my speed which had slowed down to a steady plod picked up along with the power in the kick. I confess to swimming the last 20metres butterfly, terrible showboating but I was amused to see Dave Granger repeating exactly the same trick 2 and a half hours later when he finished!
After feeling nauseous, fatigued and exhausted for the last few hours while swimming, almost the minute I finished I felt great! The satisfaction of another iconic swim ticked off and the pleasure in winning a race seemed to make the physical pain melt away. It probably helped that the sun was now out in force and I was fully able to appreciate the beautiful setting.
Some swims you finish and find yourself swearing that you won't do another long painful one ever again, other swims you start planning immediately for the next one. This was definitely the latter and having completed my main swim for the season I found myself starting to think about the next challenge. Two more marathon swims this year to go - Windermere and the River Dart and even bigger hopes for next year. Who knows I might even have to come back and do Zurich again one day. 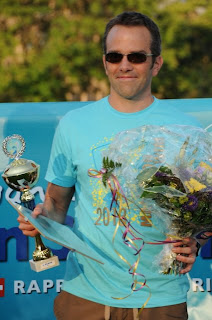